Back
Take the Chili Challenge: Nachos, the P.K. Way 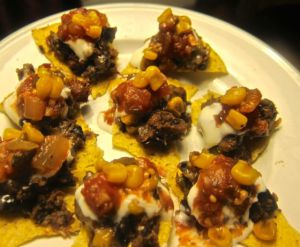 Last week I wrote about the joys of making chili, a fabulous winter staple of mine that is really fun to prepare and allows for lots of creativity. It’s also loaded in nutrients if made with tons of different veggies. And, when cooked up in a large batch, it yields leftovers for both fridge and freezer—no small point if you are a busy person with more to do than cook all the time. (And who isn’t?)

So why the chili redundancy?

Let me explain. Last week, I was invited to participate in a cooking demo for a party on Saturday night. I gave a lot of thought about what to make and also had limited time and kitchen facilities to employ at the art gallery venue. Plus, I wasn’t exactly sure about the audience, in which case I couldn’t decide whether to go with familiar favorites or fine-dining fare. Normally I tend towards the latter, so smoked trout on endive with avocado mousse, olive-fig tapenade on whole grain crostini, crispy kale chips, and smoked salmon on cucumber discs with creme fraiche and herbs all jumped to mind.

Nonetheless, I decided I didn’t know the party-goers well enough to ensure the above apps would fly; there are lots of people that don’t like olives or seafood, for example. Thus, I decided to go with a traditional crowd favorite done up the P. K. Way, along with a few accoutrements to kick things up a notch. Here’s what I did:

And, um, I may also have conducted a mini-science experiment during my cooking demo.

Okay, fine, I’ll admit it: that’s the real reason I decided to make nachos for this party.

Nachos My Way: Where’s the Beef?

My blog’s mission is to encourage plant-based diets, which are much healthier for you as well as the planet. In brief, this is because there is a large environmental cost to raising animals in part due to the massive inputs of water, grains, and petrochemicals, alongside many other reasons beyond the scope of today’s post. That said, I strongly believe that part of the reason people don’t consume vegetables and vegetarian-type dishes is because they often —how shall I put it?—suck. But with a little cooking know-how and a solid selection of spices, vegetarian food and plant-based dishes can be incredibly delicious and satisfying. Including vegetarian chili.

Keep on reading, I beg you, because I know that the vast majority of my readers are not vegetarian and I imagine at least some of you are already rolling your eyes, doubting that a non-meat chili could ever be as delicious as that made with meat, let alone mistaken for one with it. But do remember: I’m a foodie, so I’m very serious about food tasting good—nay, spectacular—and I wouldn’t be writing this if I didn’t truly believe what I’m saying. Oh, and it’s been scientifically proven, too.

Okay, that’s an overstatement, alas, as the evidence is anecdotal, my sample size isn’t large enough, and the study design has limitations.(Yes, I really talk like this.) I now regret not conducting a full-on blind taste test at Saturday’s party, because what I really wanted to do was compare two batches of chili and have people do a quick survey on my Facebook page trying to guess which was meat. But see previous comment on not knowing my audience. Not to mention that I was brought on to make the party more fun, you see, not to feel like an 8th grade science class. (“And now, for the data collection portion of the party!”)

I’m kidding about all of this, of course. Only some of my parties have surveys.

Anyway, my point is that numerous people have tasted this chili at my house and now over the weekend and had no idea the “meaty” ingredient was Texturized Vegetable Protein not ground beef. TVP is a soy-based protein that can be added to lots of different foods to boost flavor, texture, and protein to a variety of foods. It does a spectacular job in chili and taco filling in particular. I simply served up the chili on the chips with a dollop of guac and no one was the wiser. I later asked people what they thought about the chili and no one had a clue. In fact, what stimulated the subject for this particular post and Saturday’s chili challenge was a comment by a meat-eating friend who once said to me “This meat is delicious!” after taking a bite of TVP tacos. I am not making this up. This has happened multiple times with different friends and diverse dishes.

So think about swapping out some TVP for ground beef (or poultry or pork) the next time you make chili or tacos. You certainly don’t need it, and this particular recipe is fabulous on its own. (The main ingredients are onions, poblano peppers, black beans, corn, and tomatoes.) Yet, if you really enjoy the texture of a meat-based chili, but are trying to  expand your non-meat cooking repertoire, you must try this recipe.

Healthier for you. More sustainable for the planet. Definitely better for the cow.