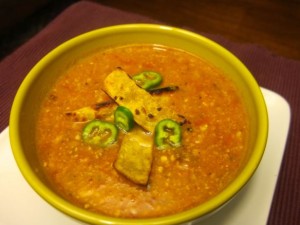 Not into Indian food? Hard to believe—have you ever given it a chance?—but to each his own. Let’s return to a cuisine that is no doubt more familiar to most of my readers: Southwestern / Mexican / Tex-Mex. I’m posting this recipe today at the behest of my sister. She loves my soups and received five of them for her freezer last Christmas. (She doesn’t enjoy cooking.) If you’re new to my blog, it’s worthwhile reading the skinny on soup to learn just why I eat so much soup (and checking out my recipes page for many more great soups). Not that I need a reason beyond “because it’s so delicious!” but there are health and weight reasons it’s great, too.

Today’s dish takes the soul-warming Southwestern flavors you love and puts them into a soup. I’ve used the recipe of Wolfgang Puck as a starting point but include many of my own ingredients and touches. There are tons of recipes out there on the web so just poke around to find one you like and read today’s post for a few tips to make it healthier for you and the planet. Well, relatively speaking. It does have a garnish of fried tortilla chips!

Read on, fellow Mexican food lovers, read on. Or, rather, look at the pictures for inspiration and a few guidelines, then get cooking!

1. Prepare your vegetable stock. Many recipes call for chicken stock, but it’s totally unnecessary. Trust me: I used chicken stock all the time before I wised up and started making my own veggie stock. It’s easy, better for you, and better for the planet. Here’s a cooking video that shows you how. If you don’t have time, get it from the store but watch the sodium content…

2. Cut the tortillas into squares or strips and sauté until crisp. Try not to eat them directly out of the pan. Maybe just one or two…and do save a few for the garnish.

3. Remove kernels from cobs and add to food processor along with onions, garlic, and poblano peppers. (Peppers optional: heat varies so take care.)

4. Whir away. Pretty! Smells great, too.

5. Add to pot with tortillas along with chopped tomatoes and stir together. (You can use canned tomatoes if you prefer.)

6. Mix it up over medium-high heat to bring the flavors together, about 10 minutes. (Don’t forget to add all your Southwestern spices at this point, like cumin. That’s the key!)

7. Pour in stock, stir, and add the corn cobs. Bring up to a boil then simmer until thick and reduced. Reducing takes a while, but you’ll see how the flavors are enhanced and the soup gets thicker. This is a critical step: don’t rush it. Do some other stuff while it’s cooking, just stir it every now and again.

8. Once reduced, remove the cobs and and carefully use the straight edge of a large knife (the back edge) to scrape off the remaining kernels. Can you skip this step? I suppose, but it’s worth the effort to add these wonderful concentrated flavors and viscosity to the soup while reducing your food waste. Plus, you’ve come this far… You can do it!

9. Add the kernels and stir. Feel free to purée the soup if you like a less chunky texture, or thin out with a bit of remaining stock. (But not too much otherwise your reducing was all for naught; you don’t want to dilute the incredible flavors.)

10. Prepare the toppings of your choosing. I enjoy a sprinkle of cilantro, cheddar cheese, and diced poblano pepper plus a few tortilla chips.

So there you have it: tortilla soup in ten steps. More than your average soup but remember as always to put some in the freezer and keep some in the fridge for subsequent meals. It’s even better the next day…