Back
A Healthy Cup and Plate, Sound Science, and a Spank for Soda 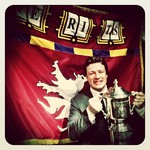 I love this photo of Jamie in front of Harvard’s flag – Veritas – because that dude tells it like it is, and it’s awesome.

The Healthy Cup Goes to The Naked Chef

Know who Jamie Oliver is? The Naked Chef is a rock star in the culinary world, a chef with programs in Britain and the US dedicated to changing the food system and fighting childhood obesity, one school at a time. Thus he’s a rock star in the nutrition and public health worlds, too, which is why he received the Department of Nutriton‘s Healthy Cup award at Harvard School of Public Health (HSPH) last week. Humble and hilarious, inspired and impassioned, hearing Jamie speak about food and children’s health and his inaugural Food Revolution Day on Saturday, May 19 was an honor and pleasure. (Extreme back pain notwithstanding.)

An unexpected treat was seeing HSPH’s new video highlighting the important work the department and school are doing in researching diet and disease associations such as obesity, diabetes, stroke, cancer, heart disease, and hypertension, among others. The video takes a look at current nutrition science and food policy – with a bit of satire, no less – and also has a scene comparing Harvard’s Healthy Eating Plate with USDA’s MyPlate, discussed in detail here on my blog. The six or so minutes are worth watching.

A Healthy Plate (and Fork) in Practice

Another terrific thing about the Department of Nutrition and HSPH is they practice what they preach when it comes to healthy eating, something I enjoyed and took for granted while I was there. Regular readers know I’m a foodie as well as a nutrition scientist, so in my world there’s a time and place for yummy, chocolatey, buttercreamy treats on special occasions. (Just search my blog.) That said, one of my biggest pet peeves is going to health- and nutrition-related conferences and academic meetings where unhealthy food abounds. Conferences can be a veritable recipe for weight gain, with their constant cookie-laden coffee breaks. I’ve also been to meetings where soda is the only choice of beverage. With styrofoam cups. Seriously? Come on.

(I’d digress further into the lack of recycling and other uncool practices at some of these places, but I feel my blood pressure beginning to rise so I’d better settle down.)

Cucumber-Mint Water: Oh-so-pretty and unbelievably delicious, it’s the first time I’ve ever had it. Seriously, ditch the soda and other sugar-sweetened beverages. In Jamie Oliver’s own words: “I still think soda needs a good spank.” Well said, Jamie. Well said. Colorful Veggie Boats. Remember, the greater the variety and more brightly colored your, er, boat, the healthier you’ll be; the devil’s in the dietary details. And veggie-based dips are fabulous accompaniments, like guacamole and salsa verde (roasted tomatillo salsa). That’s all, folks! Just a little healthy food and beverage inspiration as we start the summer. I will also humbly remind you again to look to the right places for dietary advice: learn to distinguish science-from anti-science then use science to win; the latter is an even more appropriate post now that we’re in baseball season. I’m so excited to cook delectable and healthy dishes with you as the seasonal produce arrives here in New England! In the meantime, ditch the soda, eat more colorful veggies, and if you must use disposable serving vessels and implements on your excursions, keep an eye towards the environment and remember, as always, that nutrition’s more than just about you.