Back
Non-Dairy Eggnog, the P.K. Way 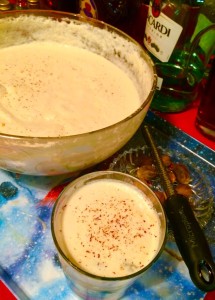 With the growing awareness of the environmental challenges associated with beef and dairy production, among other concerns, does nog need the dairy? That is the question I sought to answer this holiday season.

Don’t get me wrong: I believe in moderation when it comes to most things, and indulging in a cup  of annual eggnog falls squarely into that category. If you enjoy traditional nog, do check out my original recipe here. It has better-for-you modifications to make it my own, of course—read: fewer calories and less saturated fat and cholesterol—but it does use milk.

But can eggnog really work without the “moo”?(I’ll leave the non-egg eggnog recipes to someone else to sort, at least for now.) After all, the vast majority of the world’s population is lactose intolerant, and there are a lot of tasty milk substitutes out there that provide taste and cow-free nutrition with a smaller carbon footprint than dairy. The minor alterations I make here, mainly substituting almond milk for skim milk, resulted in a tasty beverage that did indeed meet my eggnog craving. (See serving suggestions below).

Of course, I’m used to this kind of thing, so it worked for me. The real test is: Did anyone else like it?

All I can tell you is that I served it a holiday party, and saw people going back for seconds—and some for thirds. So I’m guessing people couldn’t tell the difference between this non-dairy nog and the real thing, or liked this version just as much.

Then again, it could have been the rum.

In a large saucepan or pot, whisk up the eggs, then add the sugar. (If you use an electric beater, don’t overbeat and make it frothy.) Add the milk and cook slowly over medium-low heat, whisking constantly. More or less constantly, I’d say. I tend to multitask while waiting for this to cook but do be careful. There is a fine line between eggnog and custard, as I’ve learned. The latter is delicious, but not to imbibe. (More on this in the original eggnog post here.)  Add the spices, orange peel, vanilla, and honey, stirring to combine.

It usually takes around 20-30 minutes for the nog to reach a temperature of about 160-170 degrees F (70 C or so), which you want to do in order to cook the eggs.  When it reaches the correct temperature, remove from the heat and let sit for 2-3 hours. If the nog appears a bit lumpy—it’s just a bit of cooked egg—simply strain it through a colander. Perhaps because of the lack of dairy protein, or possibly because I used a different pot than usual, this recipe created very few egg solids, which was a bonus.

Taste, and adjust the seasoning, viscosity, or creaminess as you desire by adding a bit more of the above ingredients. This recipe will yield a nog thinner than most given the lack of cream, but I happen to like that. If you prefer a richer nog, simply add a bit of cream (if you do consume dairy) or nondairy creamer (but not the fake gross kind that’s pure sugar). Some people like to add whipped cream, although I personally don’t like to turn my nog into dessert. Whatever. Make it your own!

Note: Even though this recipe uses almond milk, I do not think it produced a dominant almond flavor. Perhaps just a hint, but I felt it worked with the other holiday flavors like cinnamon, cloves, and orange peel. Delightful! Also, do feel free to separate the whites from the yolks and add whipped egg whites to the cooked and cooled nog. That’s the version shown in this photo, where you can see it looks a lot lighter (and whiter) than if they had been cooked together. 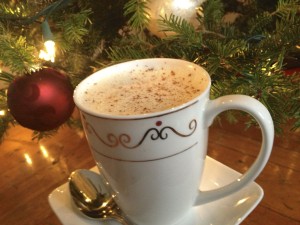 Eggnog all on its own, chilled, is lovely when garnished with freshly grated nutmeg, as pictured on the holiday table above. Of course, those who like it spiked can add their own spirits as desired, whether bourbon, scotch, rye, whiskey, rum, Grand Marnier, or brandy; a combination also works well. Because this recipe does have a subtle almond flavor, I added a shot of amaretto, creating a very nice seasonal cocktail. And this recipe also created beautiful foam, making a perfect eggnog latté.