Back
Spicy Kale and Corn Sauté: Side or Starter, It’s Up to You 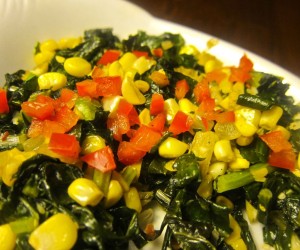 I’m not sure I’ve ever posted a side veggie dish before other than a salad. I think that’s because it’s very rare veggies are on the side in Newby world. In my home, vegetables take center stage, baby. In fact, this particular dish became a side for reasons that will become clear as the week unfolds. In the meantime, I give you a kale quickie that has lots of different uses.

Indeed, it’s no secret that I’ve been having a love affair with kale since last fall, when I made the best kale salad ever including roasted Brussels sprouts, pecorino, and toasted almonds. This formidable headless crucifer rode again in another fabulous salad featuring beets and smoked salmon (salmon optional). More recently, grilled kale made an appearance in a fantastic grilled Mediterranean vegetable sandwich. (The nutrition facts are discussed in the salad posts, if of interest.)

That said, kale is most often served sautéed or braised, which is what I did this Saturday past as part of a magnificent dish to be revealed another time. (Hey! All you reading this now? It’s here!)

1. Slice the kale into thin strips and add to a medium hot fry pan with ~2 tablespoons EVOO. If the inner stalk appears particularly thick and fibrous, you can remove it; it isn’t always necessary in my opinion. Season with a touch of salt, freshly ground pepper, and a bit of crushed red pepper flakes. (Heat optional, of course.) 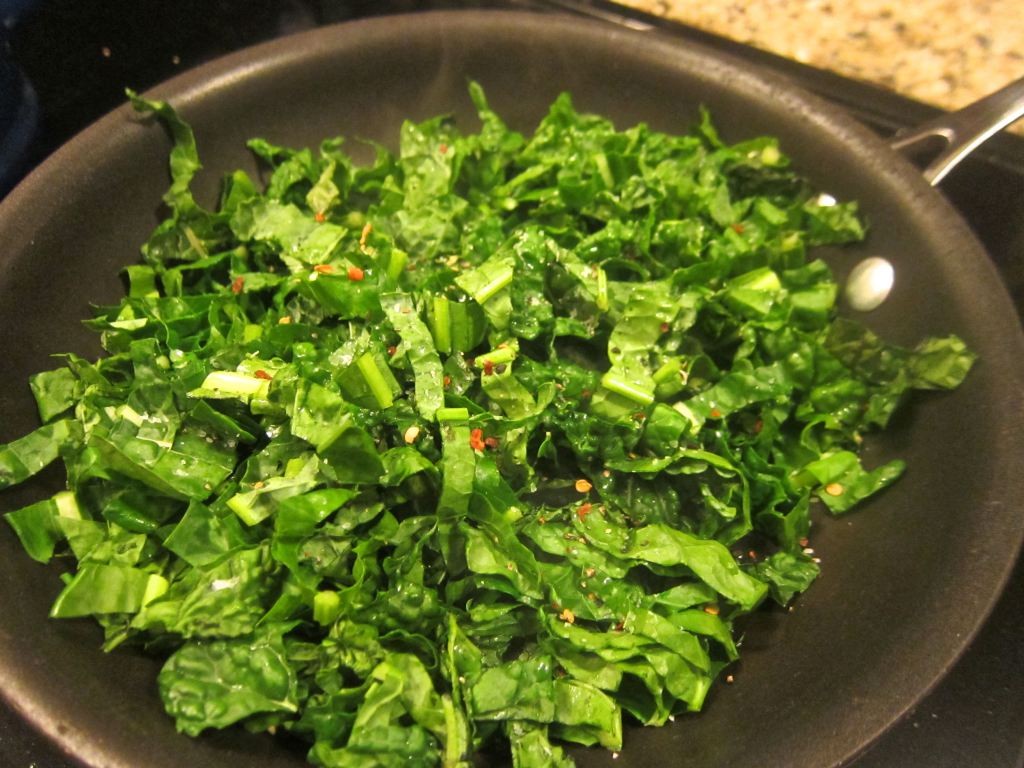 2. After a few minutes, give the kale a toss and add the fresh kernels from one ear of corn to the pan. (Uh, remove the raw kernels from the cob first. Be careful, now, or you can use frozen. I’m just a corn-on-the-cob fiend.) 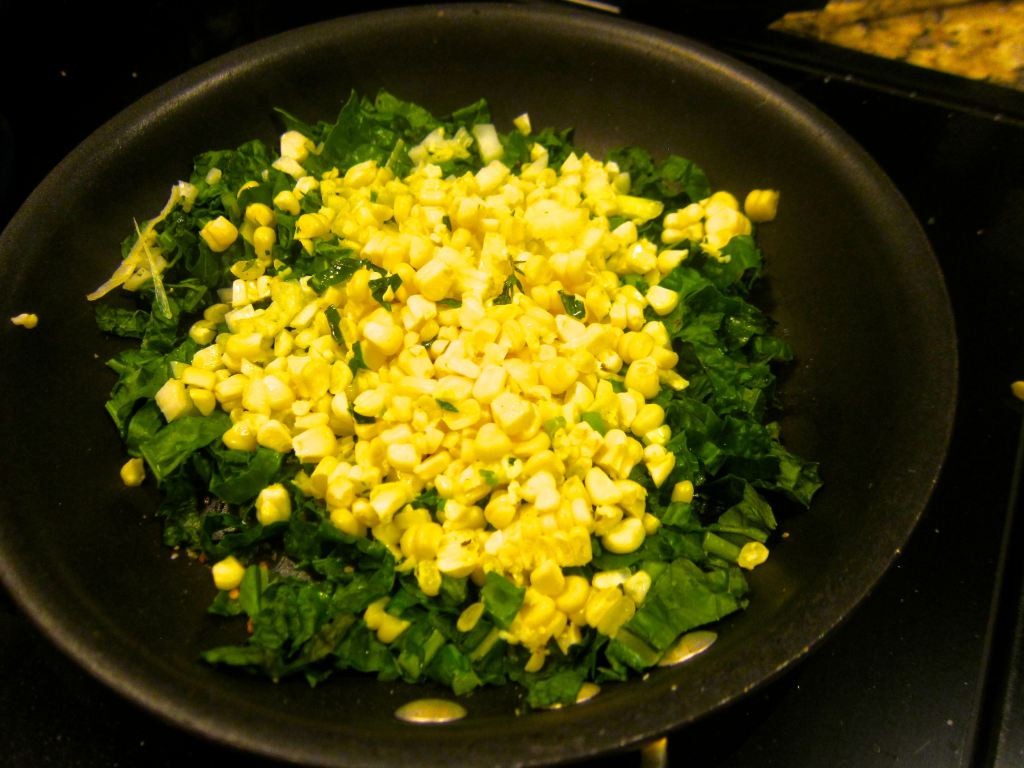 3. Cook down until the kale is wilted, then add a few clove of crushed garlic. Taste and reseason as needed. Finish with a drizzle of apple cider vinegar for a little zing, if you’re into that kind of thing. 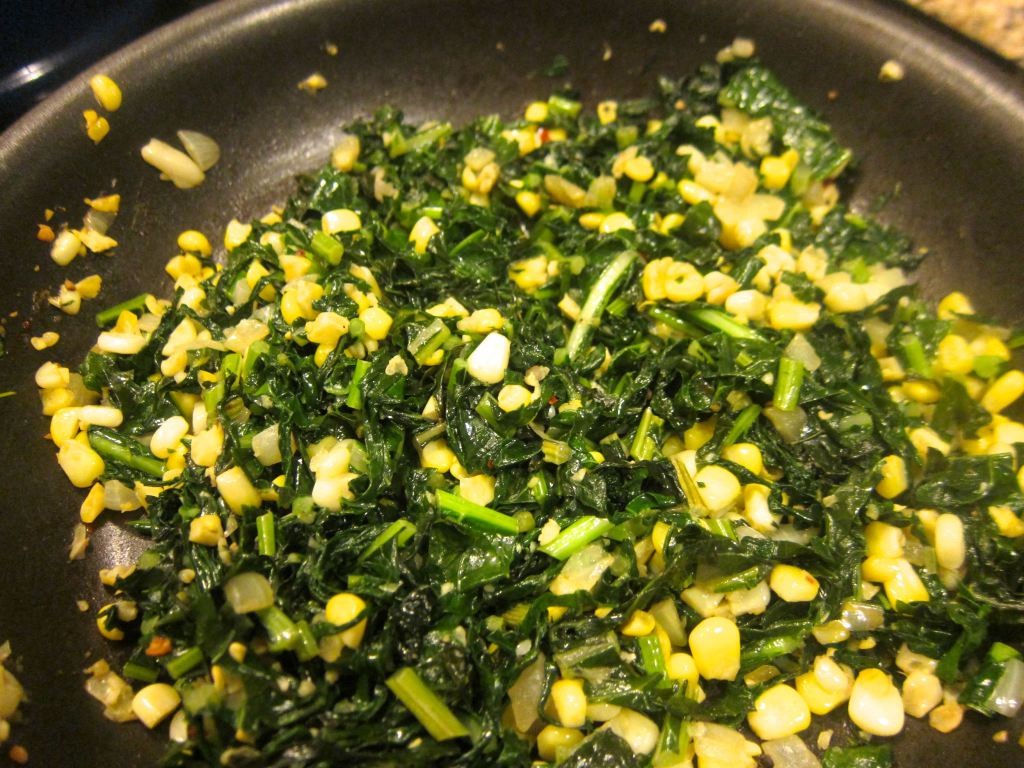 4. Serve and garnish with diced red pepper, if desired. (I was ambivalent, which is why I didn’t add it to the sauté mix itself, but then thought, “Hey, I’d like to see some more color!” Whatever.) 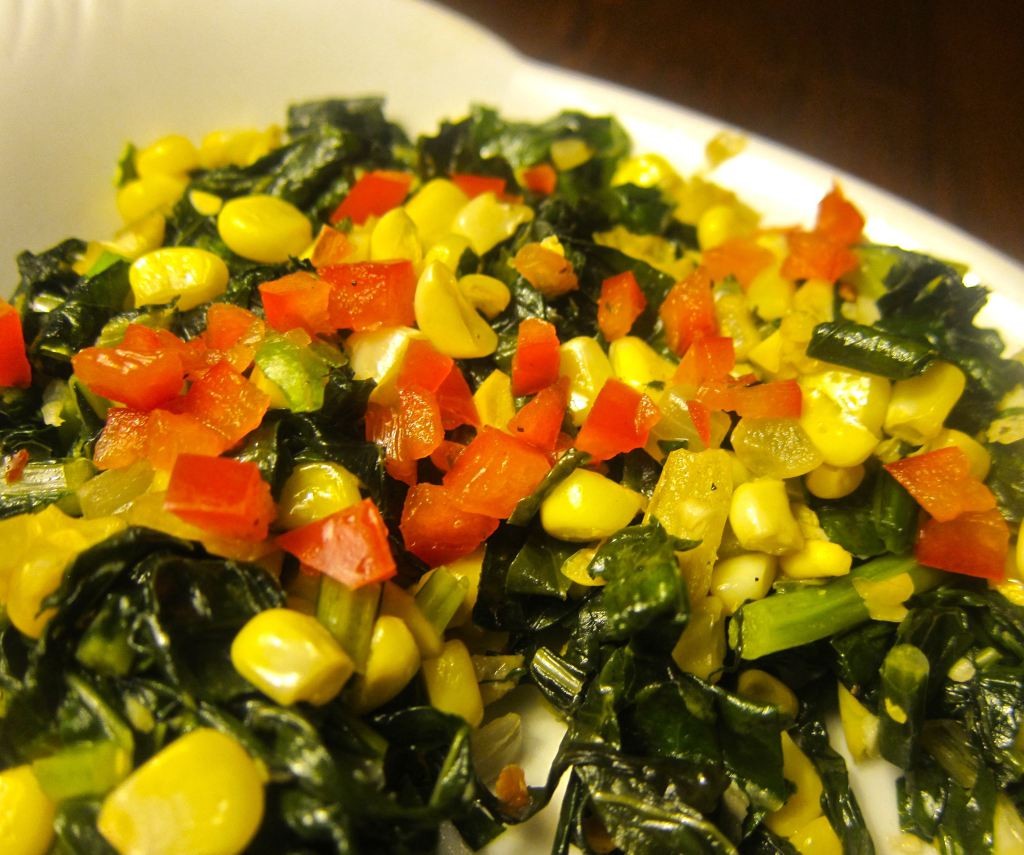 Whether on the side or the starting point to a main dish (e.g., tossed with whole wheat pasta), sautéed kale and corn is a versatile and delicious way to showcase vibrant summer flavors. Other veggies are welcome to join the party, too. It’d also be terrific topped with two fried eggs or stuffed into an omelet.

Which is what I was actually planning to do with the leftovers, but there were none.