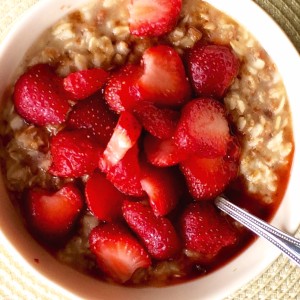 This post is dedicated to my sister, who rolled her eyes following last year’s lobster bisque recipe, saying “No one’s ever going to make that!”

Okay, then. Tell me how you really feel. (I thought.)

No, really. Don’t hold back.

Yes, I do love to cook and occasionally write about elaborate meals that I and my foodie readers enjoy. Guilty. Make no mistake, though: peanut butter on toast, pasta and tomato sauce, big salads for supper, and hearty vegetarian soups play the starring roles in my diet, many of which are pretty simple to make. Really.

“Why don’t you do a post on oatmeal?” she continued.

Well, now that we’ve taken on a more constructive tone, that’s actually a great idea, since oatmeal is also a regular part of my diet and people probably don’t realize how easy it is to cook it at home—and it’s cheaper, healthier, and uses fewer natural resources than those little packets at the store. They’re okay in a pinch, very convenient, and more nutritious than a lot of other store-bought breakfast choices out there for sure, but it only takes five minutes to bring a bowl of hot, delicious oatmeal to your table.

And, despite commercials and cereal boxes that often picture mom feeding spoonfuls of some unrecognizable cereal into a toddler’s mouth, oatmeal is not just for babies or children. In fact, there’s a lot to be said for traditional “kid” foods that are great options for adults, too. (A peanut butter sandwich comes to mind.)

Check out the video for the how-to and learn why it’s so good for you.

So, yes, I find it perfectly acceptable that lobster bisque and oatmeal both appear happily on my blog. It’s all relative, though, my friends: I make lobster bisque about once a year, and I eat oatmeal around 3 times per week.

And if you had to choose only one to incorporate into your diet, definitely select oatmeal.

Whatever age you are.