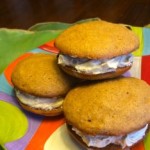 Now, now people, I’m talking about whoopie pies, those sweet little concoctions of “is it a cake or is it a cookie but who really cares anyway.” (Or the titular “pie,” I suppose, but that one doesn’t make sense to me at all.)

And let me begin by saying that you should stop reading and make these. Make these now.

Since writing my first post about whoopie pies on Halloween, I’ve received emails from several friends begging for the recipe. Here at last is today’s post with my own take on what is the official “state treat” of Maine as of just this year. (Not to be confused with its state dessert, which is blueberry pie.)

But before all that, a few more fascinating whoopie pie facts and how I fell in love.

Apparently the origins of this humble little dessert are hotly contested, according to its entry on Wikipedia, with both Maine and Pennsylvania claiming it as their own. Maine took the world record away from Pennsylvania for the largest pie last year, weighing in at 1,062 pounds vs. 200 pounds, respectively. (Check out the entry for more whoopie pie trivia. Interesting stuff, and seems to need some more research if any of you are so inclined.)

Truth be told, this tasty delight never really appealed to me very much, and I’ve only had a few in my life while visiting family in Maine. I’m not exactly sure what my deal was—what’s not to like?—but I think I was biased because of the name, which is really rather silly. It just doesn’t sound as good as, say, “mousse,” “ganache,” or “tiramisu,” with their lovely, mellifluous names that make your mouth water simply by uttering the words. Not to mention that apparently the dessert is so named because men yelled “Whoopeeeee!” when finding one in their lunch pail in days of yore.

All this changed one late autumn night last year, when my friend Sharon baked some pumpkin whoopie pies for a late-night cast party. It was the first time I had eaten a whoopie pie in quite some years, and it was absolutely divine. They were filled with a marshmallow cream, one of the standard delectable fillings; she’s also used cream cheese.

Fast forward one year later to Halloween 2011. Some people carve pumpkins into jack-o-lanterns while others create soups, breads, stews and, on special occasions, whoopie pies. Here’s the how-to.

The Pies. I modified this recipe from Bon Appétit magazine. First, I used a sugar pumpkin freshly roasted from the oven. (Canned works just fine, too, if you prefer.) Second, I used white whole wheat flour in the batter, which is more healthful than white flour and works equally well in many baked goods in my experience. Third, I added 1 teaspoon of vanilla extract to the batter. The cakes were pumpkin-y, moist, and had just the right amount of spice. Also, depending on both the size of your household and level of your willpower, I recommend splitting this recipe in half to avoid keeping tons of whoopie pies around, which is a general strategy I employ when baking to avoid over-consumption. You might also consider “making it mini.”

The Filling. I have no doubt that the marshmallow cream recipe from Bon Appétit is fabulous. I was especially excited by the maple flavor, which sounded like the perfect complement. Nonetheless, I decided to forego the fluff and did my own thing, a maple buttercream. Because, well, I personally have a thing for buttercream. Sure, it’s softer than fluff or a traditional cheese cream filling, which means it’s more likely to ooze out the sides when you take a bite. No matter. Sometimes I just take it apart like an Oreo and lick it off, or take it apart and eat each half separately. Sublime deliciousness.

I finally got it.

Also: Why are you still reading?