Back
Irish Recollections (May Include Year-old Soda Bread)

Ireland holds a special place in my heart: my first restaurant job was in an Irish pub, where I developed a love of Irish Brown Bread, Soda Bread, and beer-battered fish ‘n’ chips. And the Irish countryside is nothing less than spectacular!

Bussing Tables in an Irish Pub: My First Restaurant Job 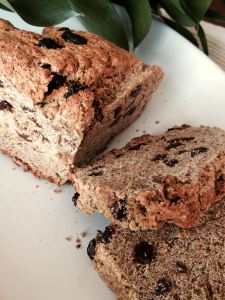 Still looking and tasting great, one year later! At the tender age of 15 I began my first job at an Irish pub named Finn MacCool’s, which apparently is named after a giant, semimythical character from an ancient Gaelic legend (semimythical?). My first restaurant job of many, I bussed tables and waitressed throughout high school and on holidays during college. I have many, many stories to tell of those times, but suffice to say that it was there I developed a love of Irish brown and soda breads. And crispy, beer-battered fish and chips, I might add – my regular midnight dinner each Saturday to fuel the shift that lasted until 3am.

Now, most serious foodies and cooks take advantage of any situation to celebrate with seasonal food and drink, especially on a holiday. However, work and new car shopping beckoned today, so my plan of cooking and enjoying traditional Irish fare had to be simplified to its essence. And by that I mean beer, which may or may not be accompanied by a shot of neat Irish whiskey later this evening. (Evidently it’s traditional, or so I’ve gleaned from a recent NYT article titled “Sod off, scotch.”) I’m currently enjoying a Guinness while fondly remembering the many fine meals and beers that were consumed on our 2004 roadtrip throughout England, Scotland, and Ireland.

That said, I did make one thing, which was whole wheat Irish soda bread with raisins. Very, very delicious! You’ve heard me talk about white whole wheat flour and how it’s a wonderful substitute in many baked goods. (I challenge you to note a difference in brownies, for example, or pumpkin whoopie pies.) My recipe perfectly melds the flavors of Irish soda and brown breads and the nuttiness of the white whole wheat works really well. How I would love to share the recipe with you! Alas, I can not.

Frozen Food to the Rescue!

Yeah, um, I actually made this bread last St. Patrick’s Day, and stored half in the freezer. It’s amazing how fast 365 days go by, isn’t it? I had no idea whether the loaf would be even remotely edible one year hence, but it really did taste the same (as I recall, anyway) and paired beautifully with my morning coffee. Unfortunately, I don’t remember exactly how I made it. How useless am I? (Don’t answer that.) I do know it was a hybrid of two recipes from Bon Appétit, one for brown soda bread and one for Irish soda bread (these are the closest approximations I could find) and that I substituted white whole wheat flour. I really need to get better about recording recipes that I create, I know, both for my own cooking purposes as well as to share with you.

While I’m fairly embarrassed to admit to you I’m consuming – nay loving – year-old soda bread, I have a few other points to make related to cooking and eating that come to mind. First, it’s probably obvious that generally things should not remain in the freezer for nearly that long, as it can impact taste and, in some cases, food safety. This was a very unusual circumstance and I tell you this story more for humor value than anything else. Sampling the bread was mainly an experiment, and I was fully prepared to toss last year’s loaf. I consider myself very, very lucky it was edible (luck of the Irish…soda bread?) and clearly it should have been eaten many months ago. I knew it was there, I just never got around to it. (Do note that it was wrapped extremely well, in plastic wrap, tin foil, and a heavy plastic bag, which no doubt preserved its freshness and flavor.)

That having been said, you all know that the freezer is my best friend, where soups, stews, sauces, and stocks await to assist me in eating healthfully when time is limited.  Baked goods like cookies, cakes, or sweet breads can also be frozen. There are two people in our home, you see, and a major reason I bake infrequently is because it tends to encourage over-consumption in our world. (I want so badly to make the Ranting Chef’s chocolate stout bundt cake! Talk about down-right dangerous. That baby would be tonight’s dinner-for-two. I’m barely kidding.) Best not to keep such things on hand, so when I do bake into the freezer things go for another time. Lots of treats keep well, so do consider storing extra portions or bring leftovers to work to share with friends and colleagues. Perhaps consider joining your local food swap group, if you have one like we do here in Boston.

This story sounded better in my head (she says, munching on her second piece of soda bread and sipping her second Guinness). Ah, well. Perhaps a few photos from our trip to the Emerald Isle will make up for it?

Our trip through counties Cork and Kerry took us along the water’s edge with its many bucolic views and breathtaking cliffs.

We saw a LOT of sheep. In Ireland, they have a unique species that has a single bright blue spot.

Castle ruins were a common sight.

Yup, there are gorgeous beaches in Ireland, too. But look closely at the weird beachgoers.

We stumbled across the remains of many a stone fort, which are pretty cool.

They don’t call it the “Emerald Isle” for nothing.

Another castle, this time including cattle.

A park in Dublin. Know who this is? (Hint: obligatory theater reference)