Normally I don’t drag one story and recipe out for three blog posts, so please forgive me. However, if I tried to cover the “why” as well as the various “whats” in one post, well, let’s just say you would have stopped reading long ago. Plus, the health and sustainability messages about tuna are relevant no matter what its preparation, and both the radish salad and the satay sauce can be used in dishes well beyond this one. It was simply too many things to cover in one article, trust me.

So, today, we’ll just get right to the seared Neothunnus with a few “exciting” cooking photos that bring everything together and be done with it.

And, of course, you can use this tuna in a whole bunch of other ways, too.

Like, say, slicing it up after it’s gorgeously crusty and rare and eating it right then and there.

1. Mix the satay sauce by following the directions here. You’ll want to do this first to allow the flavors to come together. Try not to keep eating it out of the bowl with a spoon.

2. Prepare the radish salad as discussed here. Note that for this particular dish I used only Daikon for aesthetic purposes—the dish is black and white and red all over—and omitted the sesame seeds in the salad for obvious reasons. 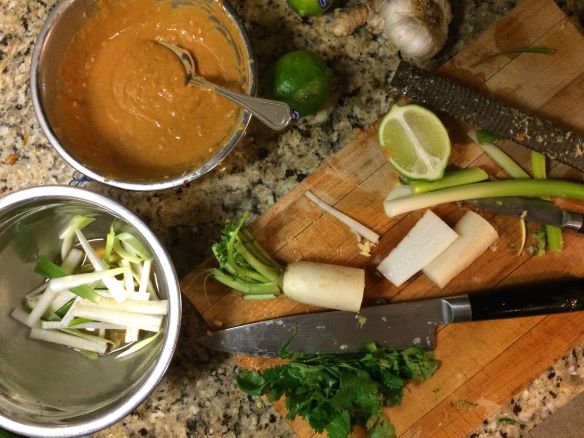 3. Jumble the black and white sesame seeds together with your fingers on a plate. Season the tuna with salt and pepper (or crushed black peppercorns if that kind of thing enthralls you). Press each side of the tuna into the sesame seed mixture, coating fully.

4. Sear the tuna.Heat the peanut oil to high heat. As soon as it smokes—worry not, peanut oil has a high smoke point—place the tuna in the pan. It will sizzle and cook very, very quickly. You do not want it to overcook: seared tuna is best served rare. It will take about 2 minutes per side. The seeds will deepen in color and you’ll see the outer edge turn color.

5. Plate the dish. Let the fish rest a few minutes then create an artful mound of radish salad, place the fish atop it, and fleck with lime zest.

I couldn’t figure out an attractive way to get the sauce involved in the plating, ergo it’s on the side. What I also discovered in remaking the dish and tasting my test pieces with the radish salad is that, ironically, it really doesn’t even need it.

Do understand that this is a huge statement for me given I could drown a happy death in a vat of peanut sauce.

Use it, don’t use it. Yet know that this beauty shines on its own abed this sprightly mix of radishes, scallions, and cilantro, perhaps with an extra drizzle of the salad dressing if you like things saucy.