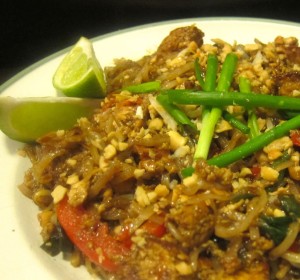 One of my most popular posts ever was on peanut butter, where I also discussed the overall healthfulness of nuts while noshing on my beloved peanut butter on toast. That said, there are tons of ways to use nuts, nut oils, and nut butters in main dishes, too, as in today’s post on traditional Pad Thai. (And yes, the dish is often much browner in Thailand street food like my photo shown here as compared to those seen in the US.)

Global flavors and spices bring much pizazz to vegetarian cooking, a topic I’m hopiing spend more time on in coming months. If you’re not familiar with the dish, it’s a Thai food favorite among Americans, including this one. I’ll bet that Pad Thai is the most frequently ordered dish in Thai restaurants, although curries are quite popular too, like my coconut curry soup with squash, rice noodles, and garbanzo beans. Here’s a bit more info about this very tasty noodle dish.

The basic idea is that rice noodles are sautéed in a sweet and spicy sauce with scallions and scrambled with an egg then topped with a hefty dose of chopped peanuts. I learned to make this dish

and other classics in a Thai cooking class in Chiang Mai back in 2003. I then got lazy and rarely made it at home, ordering it as take out like most other people. In recent years, however, I’ve become increasingly displeased with the versions I’ve received at my door, as they vary in quality—for reasons unclear, as it’s often from the same place—and are oftentimes little more than white noodles in a sweet sauce, presumably to suit blander American palates. (Can you say “type 2 diabetes on a plate”? The glycemic impact of such a meal is enormous.) Quite different from the versions found in Thailand in my experience, which have more complexity and less overt sweetness. Sure, I still order American-style take out once in a while, but it was time to begin making it at home while also giving the traditional dish a healthy makeover.

The dish can be served with any number of meats, but my plant-based version is with vegetables and tofu, not surprisingly. Swap in brown rice noodles for white rice noodles to increase the nutrient content, garnish with chopped peanuts, scallions, and lime, and you’ve got a winning dish with brilliant Southeast Asian flavors that’s both closer to the traditional flavors and healthier for your body and the planet.

Process. This isn’t exactly hard to make, but there are a number of discreet steps so I recommend doing a bit of googling and follow a recipe you like, employing the adaptations and substitutions I describe. Here’s one recipe from Alton Brown and another from Gourmet to guide you; the pictures at Bon Appétit are also helpful. I generally tweak with those online and elsewhere and will eventually provide my own recipe, but until then these or others you find will serve nicely. A few of the key steps and cooking photos from my own version follow.

1. Prepare sauces as described in the recipe and set aside.

2. Cut tofu into strips and and sear in hot peanut oil over medium-high heat in peanut oil, turning carefully every few minutes so each side is browned and crispy. Cut the tofu into strips, Remove and cut in cubes.

3. Soften the noodles to al dente according to package directions while the tofu is cooking.

4. Sauté the vegetables and crushed garlic and push to the side, then next scramble the eggs in the center of the pan for 30 seconds. Add the cubed tofu, noodles, bean sprouts, and sauce, and mix together. Let the flavors meld for 5 minutes or so. (Use a wok if you have one, else a frying pan works fine, as shown here.)

Though this meal can still come together in under an hour, you should be proud of yourself if you gave this recipe a shot given the steps and ingredients involved,. A final reminder that this version is much less sweet than take out, which could be an adjustment. As with many things in the American diet, too much added sugar is used just about everywhere, so it’s worthwhile to train your taste buds to do with less of it. Your palate will learn to prefer it, and your health and weight will thank you for it. 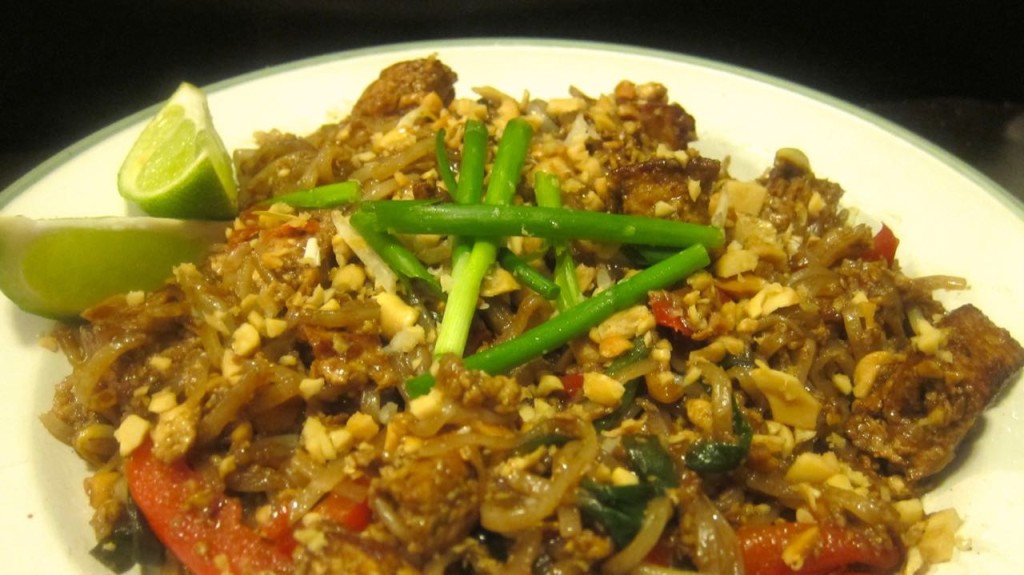 By the way, what’s the perfect accompaniment to this meal, you ask? Why, Thai salad, of course, with a sublime peanut dressing.